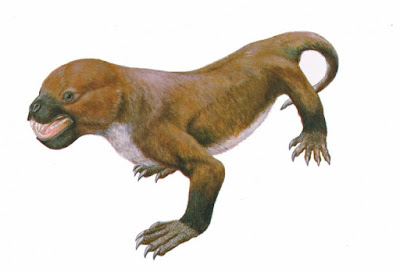 Teeth can reveal a lot, such as how the earliest mammals lived with their neighbors. Researchers have uncovered dozens of fossilized teeth in Kuwajima, Japan and identified this as a new species of tritylodontid, an animal family that links the evolution of mammals from reptiles. This finding suggests that tritylodontids co-existed with some of the earliest mammal species for millions of years, overturning beliefs that mammals wiped out mammal-like reptiles soon after they emerged.

Tritylodontids are the last known family of near-mammalian reptiles, before mammals with features such as advanced hearing evolved.

“Tritylodontids were herbivores with unique sets of teeth which intersect when they bite,” explains study author Hiroshige Matsuoka, based at Kyoto University. “They had pretty much the same features as mammals — for instance they were most likely warm-blooded — but taxonomically speaking they were reptiles, because in their jaws they still had a bone that in mammals is used for hearing.”

While excavating a geologic layer from the Cretaceous era in Kuwajima, researchers found fossils of dinosaurs, turtles, lizards, fish, many types of plants, and Mesozoic mammals. Among these were more than 250 tritylodontid teeth, the first to be found in Japan.

But according to the team’s finding, trytylodontids seem to have survived at least 30 million years longer than what paleontologists had believed.

“This raises new questions about how tritylodontids and their mammalian neighbors shared or separated ecological roles,” says Matsuoka.

The study is also the first of its kind to depend solely on details from teeth to determine whether the species is new, and also where it sits on the evolutionary tree.

“Usually fossils are identified as a new species only when a relatively complete set of structures like a jaw bone are found. In these cases, characteristics of teeth tend to be described only briefly,” adds Matsuoka. “Tritylodontid teeth have three rows of 2-3 cusps. This time we paid attention to fine details like the size and shape of each cusp. By using this method it should be possible to characterize other species on the evolutionary tree as well.”

“Because fossils of so many diverse families of animals are to be found in Kuwajima, we’d like to keep investigating the site to uncover things not just about individual species, but also about entire ecological dynamics.”